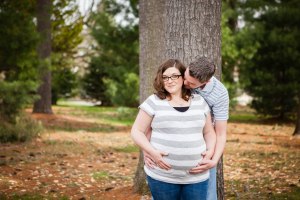 This post is more vulnerable than I tend to be on here, but I know that my struggle isn’t uncommon among women, especially those who are pregnant, so I felt that it was worth sharing.

Last week we had our “maternity photos” taken by a talented friend of mine who was in town for a visit.

I had hesitated to have them done because I am incredibly self-conscious of my appearance right now; however, knowing myself, I realized that I would likely regret not having done this to document our first pregnancy. We decided that even if we didn’t share any of them, it was important to have them taken for our benefit and for our baby girl to see some day.

We had these done the day after my 24-week appointment – the one where I was told that I had gained “too much weight” the past month, therefore making me feel even worse about my weight and appearance. The number I saw on the scale was truly horrifying and one that I never thought that I would ever see. Not exactly what you want to hear before having portraits taken!

It doesn’t help that I was already overweight when I found out I was pregnant (I had actually just lost 11 pounds and was doing really well with losing weight…figures 🙂 ). I was already self-conscious and nervous about gaining weight during pregnancy because of this, so hearing that from the nurses just made me feel *great* about myself. 🙂

I’ve tried to remind myself of a few things over the past 25 weeks:

1 – I am growing a human being. This takes a toll on any pregnant woman’s body.

2 – I am supposed to gain weight, and as long as I am doing my best to be healthy, the number on the scale doesn’t matter (much easier said than believed).

3 – After delivery, breastfeeding and a good diet/exercise will melt the pounds away, and I will be able to work toward being at a healthy weight before the next pregnancy.

4 – My husband loves me no matter what and he still thinks that I am beautiful. He tells me that daily, even though I may not agree 🙂

5 – I have to stop playing the comparison game! It doesn’t matter what other pregnant women look like. It doesn’t matter that they might look “cuter” pregnant than I do. At the end of the day, what matters is that our baby is healthy and I am healthy.

I know that this will be a daily battle for the next few months, especially when comments like the one I received yesterday are received (“you look like you’re ready to go any day!”). But, the most important thing that I can do right now is to just continue eating well and taking care of the growing baby inside of me, no matter what the scale (or my mind) says. That’s all that matters.

Other than the above, I am still feeling GREAT and am so very thankful that pregnancy has been so kind to me thus far. I am having issues sleeping because of hip pain, but Brennan’s massage skills are really helping to calm down the irritated muscles and allowing me to sleep more soundly.

I will be 26 weeks on Sunday and can’t believe that we’re getting so close to meeting her already! My last day of work is less than three months from now…crazy.

No, we do not have a name. Even if we did, we have decided to not share the name until birth for multiple reasons. 🙂

She is kicking and moving around frequently now (ever since 22 weeks), though not strong enough for Brennan to be able to feel yet.

The floor in her room was refinished last weekend thanks to Brennan and our friend Dean! Next is a fresh coat (or coats) of paint in the next few weeks and then decorating.

This is getting real.