South Carolina passed a bill after this image was created, so they will begin testing in the next 1-2 years.

Indiana expects to begin testing in 2020.

Pennsylvania will hopefully be testing by next year. We have a bill in the legislature (HB 730, numbered for Tori’s birthday) that will make screening equal throughout PA, and Krabbe will become mandatory. If you live in Pennsylvania, please contact your state representatives/senators and ask for their support!

Today was one of those days where everything made sense, once again. It was a day filled with non-coincidences (meaning that God was clearly at work because there’s just no … END_OF_DOCUMENT_TOKEN_TO_BE_REPLACED

When Tori was diagnosed (February 2015), only two states screened for Krabbe: New York and Missouri. While this is progress, it is happening too slowly. In the meantime, babies are being born with Krabbe and they aren’t being screened. Lives are being lost – lives that should be given the option for transplant, but their ZIP code means they aren’t given that chance.

We won’t stop fighting until screening is equal.

I had the privilege to speak at the Pennsylvania State Capitol this morning as part of a Newborn Screening Awareness event. You can see the video here or read the text below.

When my husband and I decided to start a family, we imagined a life of laughter, joy, fun, and growth. We talked about our dreams for our children, and when our firstborn, Victoria, entered our lives on July 30, 2014 we were elated. We couldn’t wait to watch her grow up and see the person she’d become.

Unfortunately, that’s not the way our story has gone.

I vaguely remember the nurse coming in to do Tori’s newborn screening test, but after you give birth you are tired, overwhelmed, and likely not listening closely to what is being said to you. I didn’t know what NBS was, and I know I’m not the only new mother who didn’t. All babies born in the U.S. are screened between 24-48 hours after birth by a simple heel prick test. The blood is put onto filter paper that is then sent to a lab where it is tested for diseases that are serious but treatable if caught early. I didn’t know any of that then.

We also didn’t know that while we were experiencing the joy of newborn life, another family from the Philadelphia area was fighting to get a bill passed in honor of their daughter, Hannah, who had Krabbe Leukodystrophy. They succeeded in October 2014 and Hannah’s Law was signed by the governor. This would come to be significant in our lives very soon.

Two weeks after Tori was born, I remember saying to my husband that everything must be okay because we didn’t hear anything from whatever that test was. Oh, how I wish we’d been right.

When Tori was five months old, it was like a switch flipped. She became a completely different baby. It was obvious that she was in extreme pain, and she regressed in many milestones. She stopped playing, laughing, smiling, and so much more. That was the beginning of our diagnostic journey that led to devastating news.

At 6.5 months, after a misdiagnosis of reflux, a CT scan, an MRI, a feeding tube, five days at Hershey Medical Center, and genetic testing for all three of us, Tori was diagnosed with Early Infantile Krabbe Leukodystrophy, a fatal condition that affects the brain and nervous system. A condition that means death before the age of two. Friday, February 13, 2015 changed our lives forever.

Like most people, we had no idea that we were both carriers of anything, and we never expected to lose a child to something like this. It’s not supposed to be this way. I cannot adequately describe the desperate hopelessness we felt knowing that our daughter was dying and that there was nothing we could do to save her life. Nothing. I remember being in utter disbelief that my world was being shattered into a million pieces. I remember pleading with God to intervene, to save our precious baby’s life. We live in a world where there’s almost always something that can be done to fix a problem, but not this time. It was hopeless.

Our experience led us to begin learning more about NBS and we were surprised by what we learned. There are many diseases (as many as 80) that are treatable – or even curable – if caught at birth, and no state is screening for all of them. Pennsylvania is ranked 37th when compared to the other 49 states for number of diseases screened. Every state screens for a different number of diseases: PA currently screens for 37  – Tennessee, ranked #1 of all the states, screens for 70! To learn more about NBS state to state, visit babysfirsttest.org.

Every state could improve their NBS system, for sure, but we decided to start working for change right here in Pennsylvania first. Three weeks after Tori went to Heaven, I attended my first meeting of the Newborn Screening Technical Advisory Board and have continued to do so for the past 3.5 years.

I learned a great deal about how PA operates through these meetings, and I came to appreciate the panel and their purpose; but I also saw that the situation here was worse than I knew previously: It’s not only a problem that our state doesn’t include as many diseases as other states, but it’s also a problem that screening isn’t currently equal from hospital to hospital in Pennsylvania. Surprised? I certainly was.

Over the years our fight has become about so much more than Krabbe being one of the mandatory screenings in PA – it has become about making the program better and more equal as a whole. As you can see, NBS is in desperate need of reform, and House Bill 730 (numbered for our daughter’s birthday) will accomplish all of this.

This bill will simplify the currently overcomplicated NBS system in Pennsylvania and make it so that every baby born here is screened equally. HB730 will also pave the way for additional diseases to be added to the screenings as treatments or cures are discovered. It will also institute a NBS fee – something that 47 other states already have – which will save the taxpayers money. It’s a win-win and will make Pennsylvania a better place. Most importantly, it will save lives.

Later this morning you will hear an incredible success story from my friend, Ashley. I love her story, I love how her family has triumphed because of NBS. But I also hope that, soon, all mothers with babies who are born with rare, fatal diseases can have the same hope and success she has experienced.

Our daughter, Victoria, would be five years old now. She would be learning new things, preparing for school, and living a normal life. However, Tori passed away at twenty months of age because she wasn’t screened for Krabbe at birth. Tori was born just a few months before Hannah’s law was passed; that was five years ago, her law has still not been fully implemented, and Krabbe is still not part of the mandatory screening here in Pennsylvania. If HB730 is passed, every baby born in PA will be screened for Krabbe, and Hannah’s law will finally be implemented.

Please contact your state representative/senator today and request that they support HB 730. If you are an elected official here today, please support HB 730!

Newborn Screening didn’t save my child, but it could save yours. 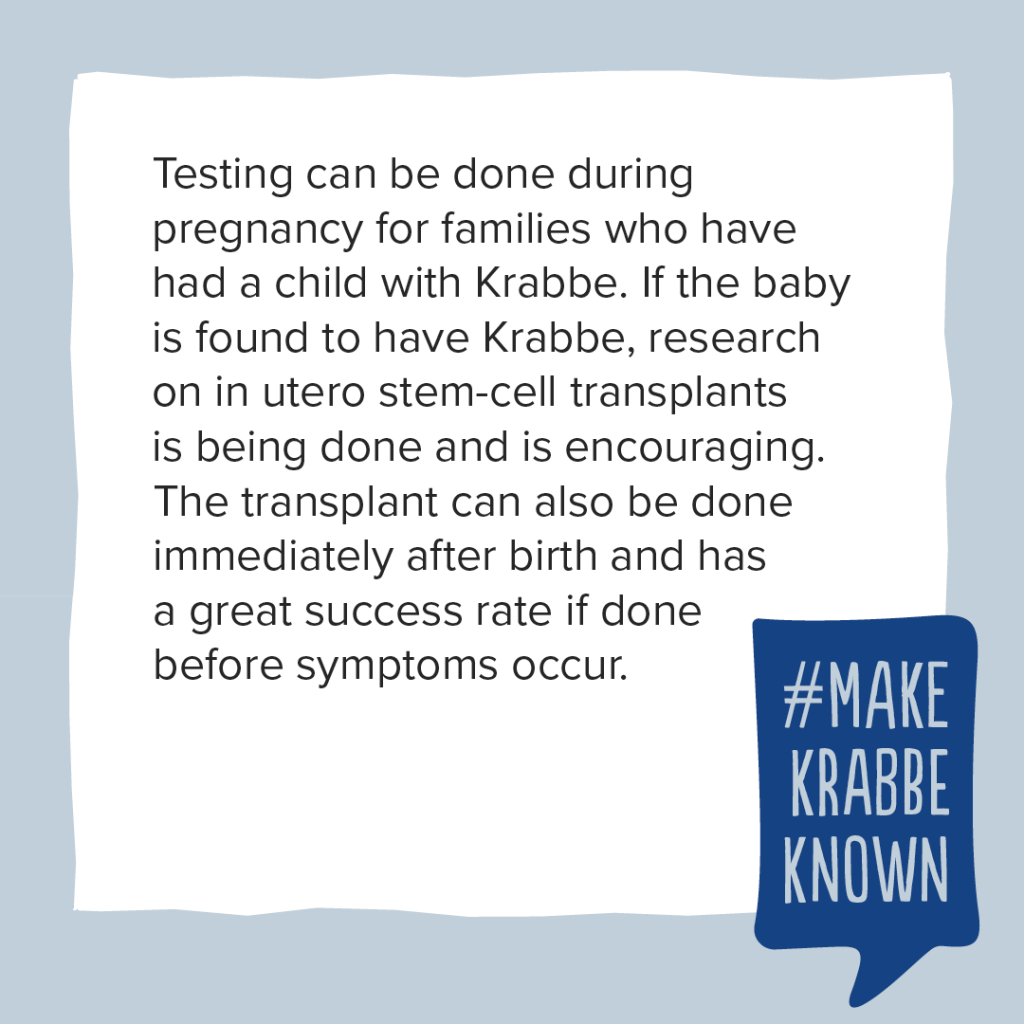 Most of us have no idea we carry Krabbe until we have a child born with it. For those families, if a subsequent pregnancy were to occur, they could be tested as early as 10-12 weeks to see if the child has the disease. If the tests are positive, they prepare for a stem-cell transplant and often induce labor at 35-36 weeks to ensure that there is little to no disease progression at birth. Someday they hope to do the transplant in utero without chemo, which will be easier for the child.

THIS fact is why we continue to fight for Newborn Screening for Krabbe.

Every baby deserves a chance at life. We have the technology to detect the disease AND effectively treat it if caught at birth, and yet only SEVEN states are screening (that slide is coming).

Owen, Tygh, Ezra, Michael, Lennon…these five babies were transplanted EARLY and are thriving! We won’t stop fighting until every baby is given the same opportunity for life. After all, we would have done anything possible to save Tori, and we want every parent to have that chance.

Even So, Joy
Blog at WordPress.com.