I first saw her after our first day of ministry at The Ravine School in Chimaltenango.

She was sitting on a stool with her produce to the left of the school’s entrance. She was beautiful, and she was selling my favorite thing: avocados. With my photographer’s eye, I noted the perfect contrast of her green sweater, the green-blue building, her colorful dress, and the gorgeous avocados in the orange basket. I had to take her picture.

I took a few stealthy shots but they weren’t at an ideal angle. Unfortunately, that’s what happens sometimes when trying to be sneaky. 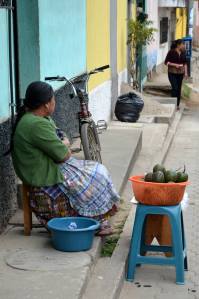 I worked up the courage to ask her if I could take her photo, only to be told “no” by this beautiful lady. I respected her wishes and retreated to the van.

I couldn’t get her out of my mind, and as I talked with the other ladies in the van about her, we came up with a plan for the next day to try to win her over – not solely for the purpose of taking her picture, though. We had something bigger in mind.

I mentioned that I would love to buy some of her avocados, and one of my teammates said, “Why don’t we buy ALL of them?” And the plan was set.

As we prepared to leave the school that day, “Avocado Lady” laughed at us silly Americans because we were so excited about a man with two cows walking down the street. That broke the ice a little. I waved to her as we drove away and she was still smiling at us. 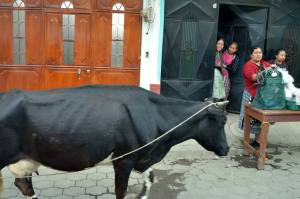 When we returned to the school the next day, we were so excited about our plan. Sure enough, as soon as school was finished, she was there with her goods, hoping to sell enough to provide for her family.

We approached her and I asked her, in Spanish, how much each avocado cost. She replied that they were 1 Quetzal each (about $0.13). The three of us had decided to give her $20 for all of them, so I held up the money and told her that we wanted to buy them ALL. Her eyes widened and she smiled as she gladly accepted the money. She put the avocados into my teammate’s backpack with a smile on her face the entire time.

To give perspective, had she sold all of her avocados at the normal price, she would have made $4. Most of the time, these ladies who sell produce don’t sell everything that they prepare (fruit in bags, etc.), and it goes to waste. We paid her $0.75 an avocado (a great price here in Pennsylvania!) in an effort to bless her and provide some extra money for her and her family because we could.

Because $20 isn’t a whole lot of money to most Americans, but to a Guatemalan woman who is working hard for pennies a day, it’s an abundant gift (about 150 Q). It was worth every penny to see the gratitude in her eyes. We didn’t just make an impression on her – there were quite a few children around who kept saying (in Spanish) “$20!” and smiling in wonder at the $20 from the strange American women.

After we bought all of her produce, she agreed to let us take a picture with her.

She may not be smiling in this picture, but she was definitely smiling inside.

Hopefully she decided that these crazy Americans weren’t so bad after all.

Hopefully she’ll wonder what we were doing in the school next door. And if her children aren’t already in school, hopefully that will change.

We decided to give some of the avocados to our team’s drivers, and we gave the rest to the orphanage at which we served that afternoon and the next day so that Papa Cesar could make some more of his famous guacamole for the girls, which made this mutual blessing stretch even further.