Last Thursday evening, as I was mindlessly scrolling through Facebook, I saw an ad that caught my attention.

I found it at the perfect time, really. I had realized recently that I was feeling a little down because I’ve been bored. I have never done well with being bored, which is why I have played seven instruments in my life, among other examples. I’m in a season of waiting for many things – waiting for my book to be in print, waiting for the twins to be born, waiting, waiting, waiting.

Brennan would ask me how my day was and I often felt like I had no idea because it didn’t feel like I had accomplished anything. I didn’t like that.

I haven’t worked at The Spa since May 15th because of the IVF process and because of our busy schedules over the summer. Once they were fully staffed I decided to go inactive and enjoy some time off. This allowed me to focus on running the AirBnB over the summer, finishing my manuscript, resting during the first trimester (which was SO necessary), and other things that came my way.

I’ve been slowly letting go of major responsibilities on my plate in preparation for the arrival of the twins. My last day of leading worship at Transcend Church is December 31 (also my birthday 😉 ), and that will be the last big thing for me to stop doing. It feels strange, but necessary, as my hands are about to be very full with two babies. 🙂

This has left me with a lot of time on my hands, and while it’s been great to spend my days watching Hallmark Christmas movies and relaxing (while also doing chores and things intermittently), I began to notice that I wasn’t super happy. Not depressed, not miserable, just not as happy as normal. I’m bored!

So, this ad. It was for a job at The Hershey Story, the amazing museum about the life of Mr. Hershey and the town/company he created. Even better, it was for “Chocolate Tasting Associates.” No, that doesn’t mean that I would get paid to taste chocolate, but it’s almost as great! Essentially, it’s like being a “chocolate bartender” because these employees serve “shots” of warm drinking chocolates from specific places around the world to guests.

Did you know that cacao tastes drastically different depending on its country of origin? It’s amazing! That’s why Hershey blends beans to create a specific flavor.

I went ahead and applied, thinking it would be fun and interesting.

The next morning, I heard back (so fast!) and was asked to come in for an interview. I think I caught their attention because of my vast experience with the Milton Hershey School, The Hotel Hershey, and Hershey Entertainment & Resorts, but I’m not really sure.

I had an interview yesterday and was offered a job on the spot – and yes, I was upfront about being pregnant! 🙂

It will be super part-time, flexible, and interesting. It will be easy physically, stimulating socially, and fulfilling intellectually. As many of you know, I LOVE telling people about Mr. Hershey and the amazing man he was. Now I will have another opportunity to share stories with guests who may ask questions. I suppose it will use my history degree to some extent 😉

I will be cross-trained to teach in the Chocolate Lab and to run the Tastings bar, and I’m looking forward to the opportunity to get out of the house a few hours a week until the twins arrive.

I had orientation today which was completely self-guided and fun. I spent time walking through the museum, did a class in the Chocolate Lab (where we used milk and white chocolate to create a festive reindeer), tasted chocolate, and enjoyed the atmosphere of The Hershey Story. As an introvert, it was exactly what I needed! 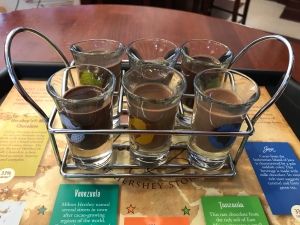 I wasn’t looking for a job, but I found one, and it’s going to be great.

4 thoughts on “I Wasn’t Looking for a Job, but I Found One…”