Today is the five year anniversary of a conference that changed my life unexpectedly.

The five-year mark has made me feel reflective, and it has made me realize how much of an impact the conference – and the author who started it – truly had on my life. Looking back, I see that God definitely aligned the timing of his books and teachings with what was going on my life.

At some point years ago, I discovered a blog and a book called “Stuff Christians Like” and I thought it was hilarious. I started following Jon Acuff and his writing.

A couple of years later, Brennan and I read Quitter and then attended the Quitter Conference in Nashville (2012). At that point, I didn’t know what I wanted to do with my life or what my dream was, but I now had some tools to help me figure it out. I knew whatever that dream was, I wasn’t doing it.

Then came the infamous email five years ago (2013) asking for adventurers that led to the Start Experiment and the amazing community that developed there.

The experiment offered practical steps over the course of a few weeks to finding and implementing your dream (this accompanied the book Start). I started by working on self-discipline as I pondered what my dream really was. I blogged about the experience along the way.

Eventually, I figured part of it out, mostly thanks to The Start Conference – which was five years ago today: 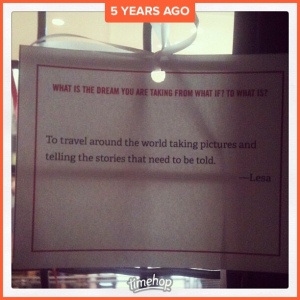 Telling the stories that need to be told. It made sense! I love photography and telling stories with it, along with writing, so it felt like a great fit! I wanted to make an impact by telling stories through images. I started a website about things to do in our city and hoped to get a start on that dream right where I was. But, that wasn’t truly satisfying me and I eventually let that project go.

Little did I know then but the story that needed to be told would be my own daughter’s.

Not long after the conference, his wife, Jenny, wrote about being a mom and that post resonated with me in powerful ways.

I refuse to believe that being a mom
isn’t a “big enough dream.”

Motherhood is a role that uses all of my strengths and talents perfectly! I began to realize that becoming a mother wouldn’t be wasting or throwing away my passions and talents – it would be the best possible use of them.

The next month we found out we were expecting, and Tori was born the following July! I was so happy in my new role, so content. 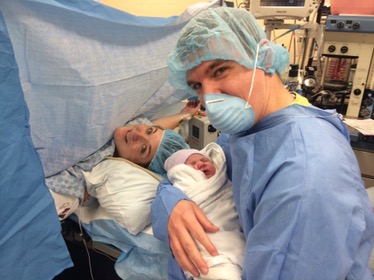 And then, Krabbe. Finding out that our six-month old daughter was dying and that we shouldn’t have more children was devastating on so many levels. And then when she went to Heaven, I was left wondering “what now?” What was I supposed to do?

Despite the potentially isolating situation in which we found ourselves, we never felt alone, and that was largely due to the community Jon created. Between notes, gifts, and visits from so many – including the large number at her Celebration of Life from several states! – we felt so loved and supported from so many “online friends.”

After she went to Heaven, Jon’s book Do Over was released and it came at the perfect time – since I was no longer technically a “mom” in terms of employment, what was I supposed to do? I revisited my dream of telling stories and (after being encouraged by an editor) I decided to start writing a book about our journey with Tori. Amazingly enough, even that project has roots in the Start Conference because I had attended the Writer’s Workshop, even though I had no intention of becoming an author at that point. I wrote and edited for about a year before finding a publisher (one mentioned at the conference, as well).

And finally, his book, Finish, was released, which helped me see the benefit of pursuing what I had started and finishing it. And I did. My book, Even So, Joy was published in January 2018. Tori’s story was told, and I can’t imagine anything greater. My initial dream was fulfilled in a way I never could have predicted, and I hope that I can continue to fulfill it in different ways throughout my life.

Best of all, I became a mother again in April, therefore bringing me back to my ultimate dream and purpose. ❤

I am so thankful for how God has used all of this to shape me and to guide me through the past five years. And I’m thankful for Jon Acuff and how he has used his life experiences to mentor others so generously. It’s been an incredible journey!