This is likely going to be long, but it is mostly for our benefit anyway because I want to remember everything that has happened thus far in case we need to recount it later.

The first five months of Tori’s life were so joyful, despite her hatred of sleep for the first three months and my accompanying sleep deprivation. She was rarely fussy – only when super tired – and she smiled and talked all the time. She was meeting and even exceeding expectations in terms of milestones. I posted photos and videos frequently because she just kept getting cuter and cuter.

In the middle of January I began to notice a change in her demeanor. She was extra fussy and had gone back to not sleeping much at all. She was clingy and I couldn’t put her down for more than a couple of minutes, if that. She had also started to have “volcanoes” again after eating – where she would throw everything back up all over me.

I was admittedly frustrated with it all because I couldn’t shower, cook, eat, or anything else without her crying because I wasn’t holding her. I didn’t think about the possibility that she wasn’t feeling well. This has been my first experience with feeling “mommy guilt” because I had no idea that she was not feeling well.

There are ranges for each milestone and I hadn’t worried about the fact that she wasn’t even trying to meet some of them yet. But when I started to see friends post photos and videos of their babies, close in age to Tori and some younger than her, achieving milestones that she hadn’t yet even attempted, I started to wonder.

One day I realized that I hadn’t seen her smile or heard her talk in about two weeks. I joked with Brennan that we must not be funny anymore because she just wasn’t laughing or smiling.

I looked back through my videos and the last one of her talking and smiling was on December 29th. I read online that babies will often stop talking when they are working on another milestone or when teething, so I didn’t think much about it during those two weeks. But, combined with her other behavior changes, it was time to call the doctor.

Brennan and I had just been talking about how she felt heavier and we were so thrilled to see her growing since she had been so petite thus far. So, when the nurse came to weigh her at our appointment and she had only gained two ounces the month prior, I started to be afraid. My five month old only weighed 11lbs 9 oz.

The doctor reweighed her to verify the unbelievable number on the scale, and it was accurate. He did the rest of the measurements and found that her head had continued to grow – meaning that her brain was getting the nutrients it needed – even though the body growth had slowed. Her body was now in the 2nd percentile and her head was in the 97th.

As I described her behavior and symptoms, he suggested that we try reflux medicine as everything pointed to an acid reflux issue. It appeared that she was only eating enough to get the hunger pains to go away, explaining the lack of weight gain and her frequent feedings. It also explained the rest of the behavior changes so well.

He wrote a prescription for baby Zantac. He said it could take 7- 10 days to take effect and up to two weeks to see a change in behavior. He said if the meds didn’t work, he wanted to have an MRI of her head done to address the lack of development and the regression of talking and smiling.

I left the appointment feeling encouraged because the diagnosis made sense, but I still had doubts and found myself worrying that something else was wrong.

The next day, she had an upper G.I. study at the hospital and everything looked good. 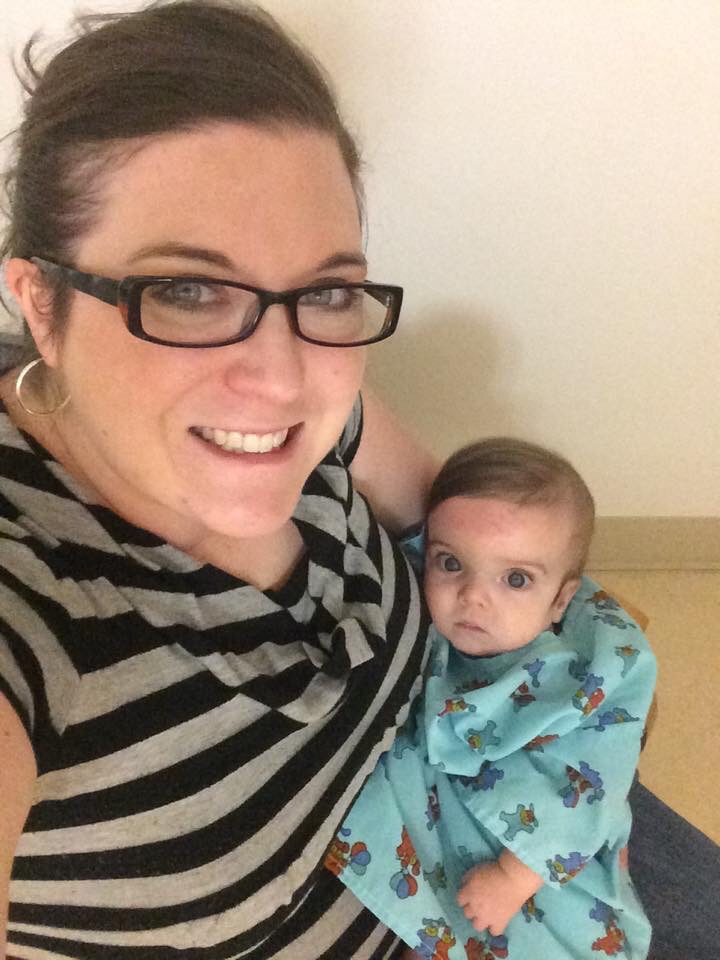 I am not a worrier or a fearful person at all. But, around day 7 of the medicine, with no changes or improvement in behavior, fear began to take over. My brain kept thinking about the what-ifs, the worst possible scenarios. I found myself in tears at one point thinking about losing her to whatever this could be. I had to pray and pray to fight the fearful thoughts in my mind.

One thing that has surprised me about motherhood is the depth of my emotions in regards to and love for Tori. It has driven me to prayer more than anything ever has. I combatted the fear with prayer and with truth – that God is sovereign and in control – but also knew I needed to take action.

Around day 8, I really started to question the effectiveness of the medicine because she still seemed to be miserable. I also continued to sense that something more was going on. But, since she was sleeping a bit better and had been slightly less fussy since we started the meds, I waited it out.

By day 13, I knew I had to make another appointment because she seemed to be in real pain now, and the sound of her cry had changed. She was also waking up with a cry that sounded like she was either having a nightmare or in extreme pain.

This brings us to yesterday. I took her in to the doctor and she was crying when the doctor came into the room.

As he listened to her, he said she definitely was in pain. He did her measurements again and found that she had only gained an ounce in two weeks, despite the fact that we had started to introduce solid food at his suggestion.

After listening to my observations and listening to Tori, he is now convinced that she is indeed in pain, and he thinks that it’s from migraine-like headaches that are possibly being caused from fluid on the skull. This would explain her getting mad and then throwing up, too, because she is feeling nauseated. And who wants to learn or try new things with a migraine?

The doctor said that this all makes sense with the jump in her head size that happened at two months. We had an ultrasound of her head then to check the fluid levels and everything was fine.

He also said that there is part of her soft spot that is a strange shape which usually indicates a fluid issue. He said this doesn’t normally show up until 6 to 9 months, which would explain this so suddenly occurring as well. He said this would also explain not eating very much because she’s in pain, as well as missing the milestones lately.

We have an appointment with a neuroscientist on Tuesday to hopefully get an MRI – for which she will have to be sedated. This is our way of getting around the ridiculous wait time to have one done at Hershey Med (May 6!).

I didn’t think to ask what the next step would be if the doctor is right, which I now think was wise. I have stayed away from Google and refuse to look this up. I am not thinking about anything except for bringing comfort to Tori as we wait.

I feel so much more at peace now, even though I should probably be freaking out. I am so thankful for the Holy Spirit nudging me and helping me see that I needed to pursue testing and treatment for her. Of course, once we know the results and the course of action to be taken, I may freak out. But, for now, “it is well with my soul.”

We are choosing to trust God in all of this and praying for relief for our precious baby. We know that she is being prayed for by hundreds of people and we feel so supported by our church. They are bringing us meals for the next week to ease the burden of cooking during this troubling time. ❤️ Such a wonderful and humbling blessing.

We are also thankful that it seems like she has only been in pain for one month and not six.

Please pray with us and for us. Pray for quick answers, for healing, for comfort for Tori, for wisdom for Brennan and me, and for the Lord’s leading in all of this.

This parenting gig is not for sissies.

13 thoughts on “Our First Bump in the Road of Parenting…”