I started making phone calls about three weeks ago to determine when the Newborn Screening Advisory Committee would be meeting so that Brennan, Tori, and I could attend.

(Remember that we all wrote to the Department of Health in November and not a single person mentioned this to us.)

It took a few more phone calls to find out what was decided (since they did not post an update in the PA Bulletin), but I finally reached the correct person and received the following information:

I spoke with the Director of the Division of Newborn Screening and Genetics.

She informed me that the panel decided to only make screening for Pompe (just one of the genetic conditions in Hannah’s Law) mandatory statewide. Pompe is the only one of the LSDs that is currently on the Recommended Uniform Screening Panel  which is why they added that to the Pennsylvania panel.

It is now up to each hospital whether or not to screen for the other lysosomal storage disorders (LSD) in the law.

I asked her if the hospitals would screen for Krabbe if parents asked for it, and she said no, but that they would refer them to Hunter’s Hope for the supplemental screening kits. This information conflicts with what our research told us – that the hospital would test if you specifically ask – so it is safer to just order the kits since we aren’t sure what is actually happening.

All of this supposedly went into effect on Friday, February 5, 2016.

Tori, Brennan, and I went to the State Capitol today and met with the staff of two different legislators to discuss this issue and to talk about possibly introducing new legislation to change the way that Newborn Screening is done in Pennsylvania, because it shouldn’t be up to the hospital to choose. Lives are at stake and geography shouldn’t dictate life or death.

Tori had fun lobbying with us : ) 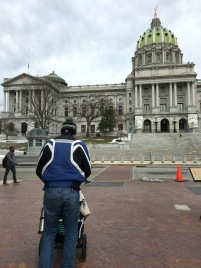 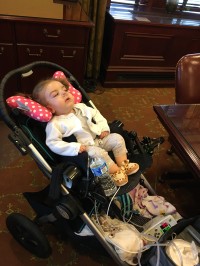 We cannot say much more at this point, nor do we have any actions for you to take. Things are happening and it’s exciting, we just cannot share the information quite yet. We wanted to provide this small update since so many have asked us lately about Hannah’s Law being implemented.

The legislature will be back in session in March and we hope to have additional updates for you at that time.

It never hurts to write to your representatives and Hunter’s Hope has made that incredibly simple! Go to this link and you can customize a letter they wrote and it will go to the appropriate people.

We feel encouraged by our meetings today and by the potential for great change to happen in Pennsylvania that will save lives. However, we also know that the fight is only beginning.

One thought on “Update on the Implementation of Hannah’s Law”